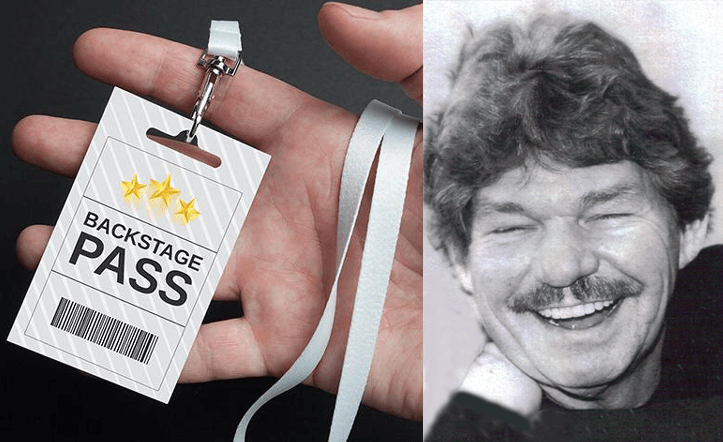 During the early and mid 1970’s I went to a lot of concerts, mainly because of working at the Hollywood Guitar Center (where I ran the keyboard department). I don’t really like going to concerts that much because I don’t like big crowds – especially after the concert….fighting the crowd to exit the arena, the traffic, etc.

There are a couple of ways to go to a big concert, especially one that has big stars (like Led Zeppelin, David Bowie, Bob Dylan etc.). Of course, you can buy a ticket like anyone else. Usually, the more you pay, the closer to the stage you’re seated. Of course, if the place (venue) is rocking the people in front of you are often standing up, jumping up and down, dancing and so forth. So, if you want to see, you have to stand up too – which kind of defeats the purpose of getting closer. If you know the performer or members of the band you can get free tickets, or, the much sought after backstage pass. This is a sticker you wear and allows you to go backstage and into the dressing rooms. Generally, the most famous performers have better food and drink backstage. Some performers have specific instructions for what they want to eat or drink and what illegal substances will be available. One of Iggy Pops demands was that they had to supply a Bob Hope impersonator and seven dwarves. Van Halen demanded an unlimited supply of M&Ms – but no brown ones. Beyonce asked for $900 titanium straws and red toilet paper. Metallica simply wanted plenty of bacon. With a backstage pass you can meet the stars and share in their food and drink.

One time when I had a backstage pass to Queen’s concert in Australia and I was in Freddie Mercury’s dressing room right before the concert. Freddie was getting a spray tan from the waist up. But there’ one big problem with getting a backstage pass. When the show starts everybody has to go to their ticketed seats. What you need is a backstage pass and a ticketed seat for the show. I found this out the hard way at a big David Bowie concert at the Forum, Colosseum in LA. It was huge venue. I didn’t know David Bowie but I knew his keyboard player, Tony. He gave me a backstage pass but no ticket to the show.

When the announcer said, “Please take your seats,” I stood against the wall near the stage. I could see two humongous security guards walking towards me. One of the guards said, “Do you have a ticket?” “Yes, I have a backstage pass.” I said this as if I actually had the golden ticket in Willy Wonka. My backstage pass should clear up any problems. The guard said rather gruffly, “Then get backstage!” I was brought down a peg or two and walked backstage to a room that had left over food, but you couldn’t see the show. I could hear David Bowie sing but I couldn’t see him or the band. I was the only one in the room.

Eventually, I heard a group of people coming down the hall and into the backstage room. To my amazement it was Alice Cooper and his entourage of about eight people. I stayed quiet and Alice Cooper kept looking at me as if to say, “Who are you?” A new lady came in and said “Alice, perhaps we should all go up to the Forum Club before the big party starts.” This was opening night and all the Hollywood glitz was invited. I had a backstage pass but I did not have a ticket to the party and security guards would be pretty tough. Alice said, “Let’s go up to the club and beat the crowd.” His group stood up and started walking to the elevator. I stood and looked over at Alice who was looking at me. He gave me a “come on wave” and a big smile and I followed the group into the elevator. When someone said something which was funny, apparently, they all laughed so I laughed and looked over at Alice. He laughed, too. When we arrived at the top floor we left the elevator and everyone turned right into the club – except me. I turned left and headed to the restroom and sat in a stall until I heard the party going full blast.

When David Bowie arrived he was with his wife, Zowie Bowie. They both looked alike except he had longer and redder hair. I sat at a table and, sitting next to me, was a very pretty lady. She was Neil Sedaka’s wife. I used to love his songs in the early 60’s when I was in junior high school. 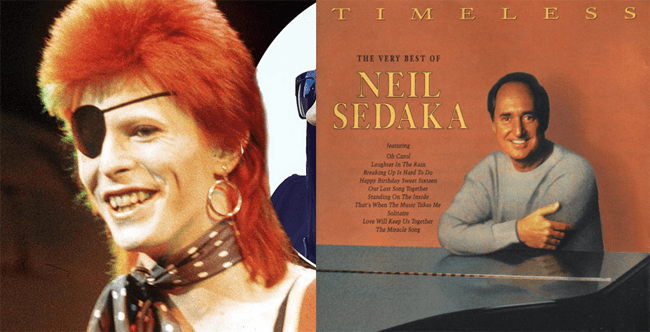 Neil’s wife told me a story about how her husband used to be a success in the 50’s and 60’s. Then he kind of fell out of favor in the pop music world, and, ran out of hit records. Eventually, though, his luck changed when he met Elton John. Elton was a big fan of Neil Sedaka and had helped him break back into the business. He once again had several hit records. Also at the table was Joni Mitchell who I hadn’t seen for a couple of years. She remembered me and asked about my blind friend Jean Philippe Rykiel. She said she met his mother, Sonia Rykiel when she was in France and that his mother had thanked her for letting her son see a recording session. Later, I was in the dinner line and in front of me were Flo and Eddy — Frank Zappa newest singers. They came from the group The Turtles and were fantastic singers. I had a pocket full of gold Woodsy Owl jewelry. The were little golden hearts surrounding a golden Woodsy the Owl and I gave them away. I’d met some of the people before, like Linda Rondstadt, Bonnie Raitt, and Joni Mitchell, and some were new acquaintances. 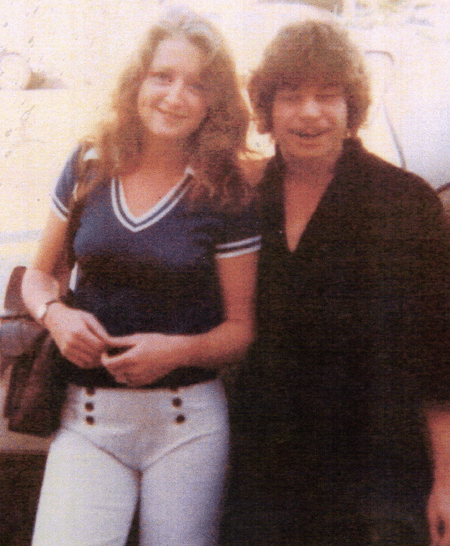 I was in a line to get a drink and Ringo Star was right in front of me. He was wearing a leather vest that had lots of pins and jewelry on it so I gave him one too. It was a fun way to advertise Woodsy. I was still getting a royalty on the Woodsy song. Ringo was very nice and had a great accent. It was a very exciting night.
Alice Cooper and Ringo Starr – still hanging out 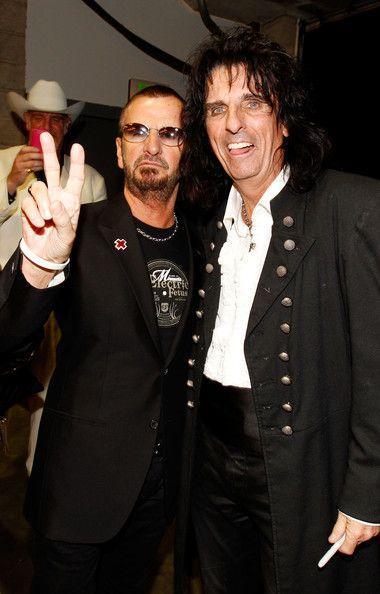 One more story about backstage passes. Because of Guitar Center in Hollywood I got to meet and actually became good friends with some great musicians in famous bands. These bands were touring around the world, most of the time, and in their touring they would usually come to L.A. once a year. So I got to build up a nice friendship with some of them. One such person was Richard Tandy of ELO (Electric Light Orchestra) . Richard was a great keyboard player. I had him take a picture with a new keyboard and his fee was a free, new keyboard. It was called an SLM concert spectrum.

While they were in L.A. I dealt with Richard and most of the roadies who were buying new gear. They always gave me a couple of backstage passes for the big concert. One year I let my friendship with these guys go to my head. When I was talking to regular customers at the store they would mention that ELO was their favorite band and I would offer them a free backstage pass because I could. But I’d lost track of how many people I’d given these special tickets. The night of the concert you have to go to a certain door where you would receive your ticket. When I showed up at the special door their were twenty-six other people there waiting for me to give them their tickets. The roadies were not very happy with me but Richard came through with the tickets.

The next year I only asked for two.

Dave and Richard Tandy (of ELO) 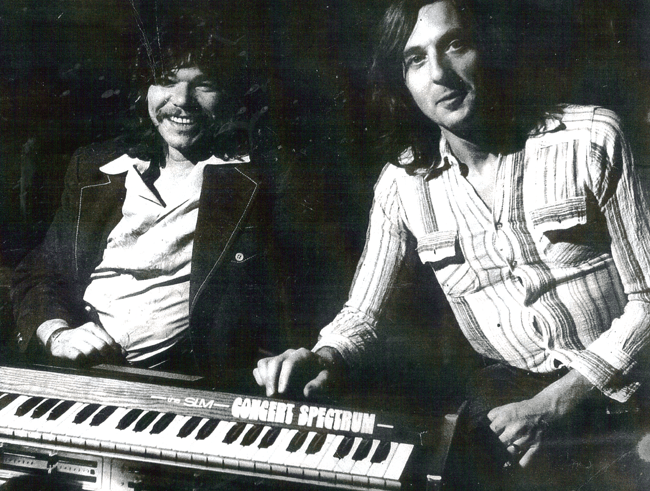