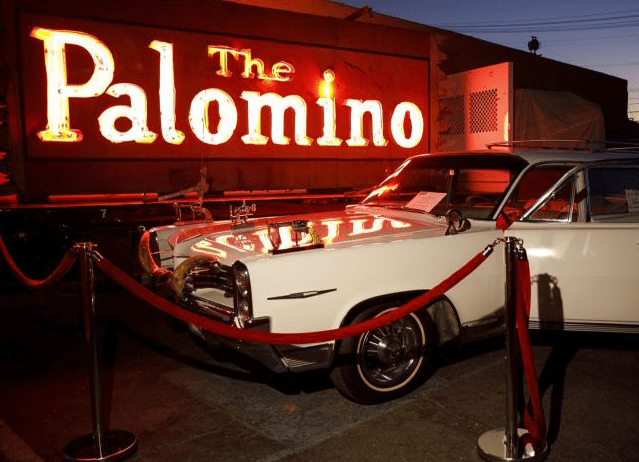 During my MGM Record days my partner and I used to spend a lot of time at the Palomino Club, either playing our music or just hanging around. The Palomino was the biggest country music nightclub in L.A. and it’s the place where a lot of country greats got their start. From Johnny Cash, to Jerry Lee Lewis, to Ricky Nelson, they were all there – it was always a fun place to be. It was the early seventies and my partner and I had a country song, called “Hot Little Hands”, that was getting some airplay in LA. So we met and were befriended by the owner of the Palomino Club, Tommy Thomas. Tommy knew everybody in the country music business. Once he introduced me to a real character named “Nudie.” Nudie owned the biggest country music clothing store in the world and he made outrageous costumes for most of the country music stars. Nudie (Bill Nudie) asked me to take a ride with him to the Hyatt Hotel in Hollywood to deliver a specially made suit for Jimmy Dean – yes…the singer, and, the sausage maker. I asked to see the suit and Nudie took the covering off and the whole suit was made with pigeon feathers…real ones. The suit was beautiful…although it looked itchy. 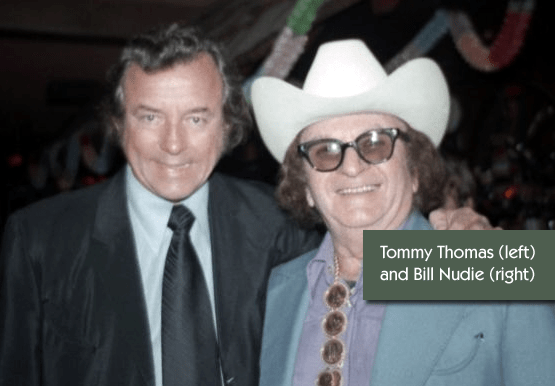 I went to his car and it was a new, white Cadillac convertible with some wild, “cowboy” extras. First, there were a set of bull horns attached to the grill. The door handles were Colt 45 pistols. Inside the car, on the dash and the inside on the leather doors, were silver dollars and horseshoes glued everywhere. We delivered the suit to Jimmy Dean and he was just like he is on TV – really friendly. I don’t know if he was so friendly when he saw the bill…$8,400.00!. In today’s dollars, according to a calculator on the internet, that suit would cost over $50,000 today. 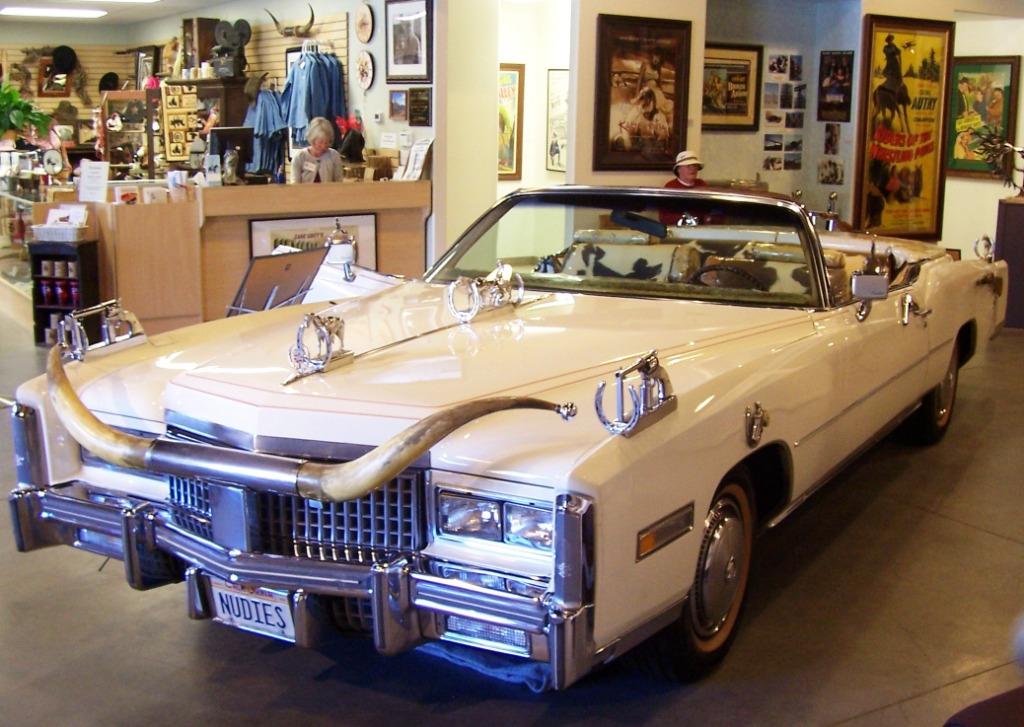 Nudie’s Modeling His Wild Clothes, Showing Off Another of His Crazy Cars 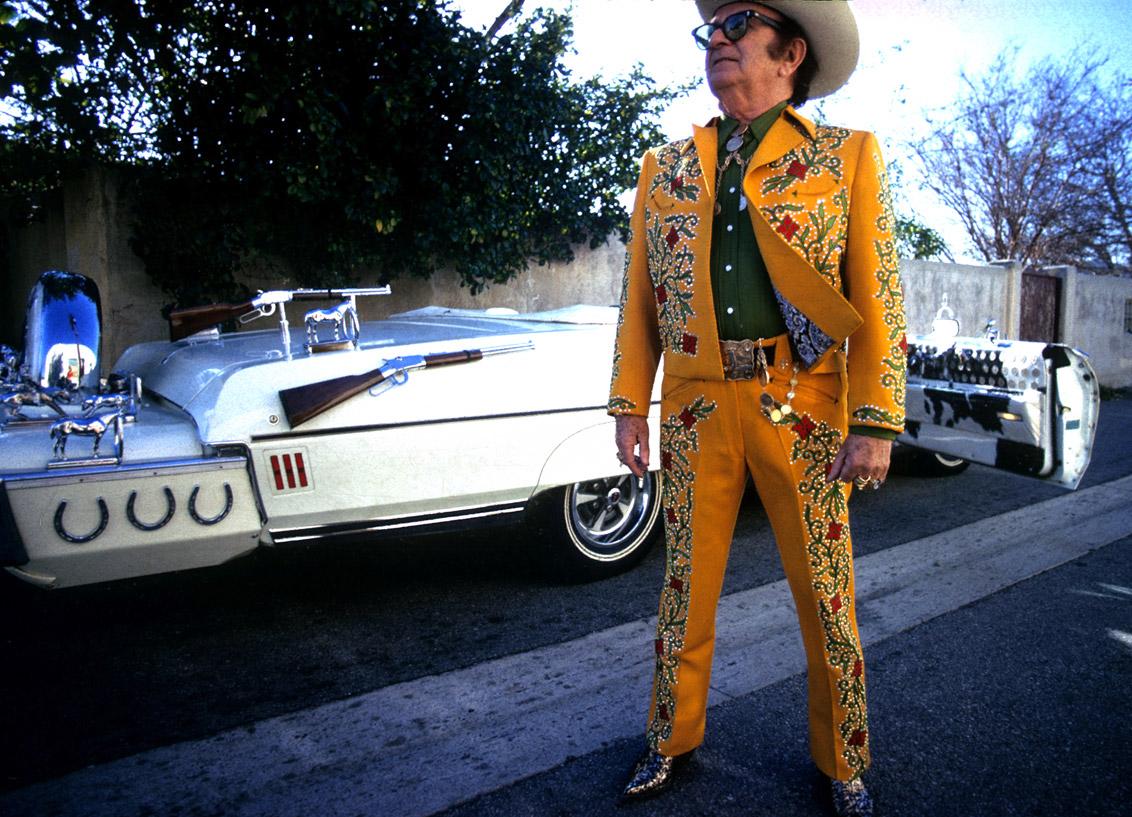 Nudie dropped me off, back at the Palomino Club and Tommy asked me to have dinner with him and an old cowboy, movie star friend of his named Chill Wills. I had seen Chill Wills in scores of old western movies and in television shows. Chill was very old and had a big pot belly and a very caustic mouth. The waitress was very sweet but a little overweight. Chill said to her, “Louise, ya know, if you’d just lose about twenty pounds you probably would go out on a lot more dates.” Louise was about to start crying and I said, “I think Louise is pretty enough already…..you’re the one who needs to drop off a few pounds, if you want to live another year.”

Louise fled the table and Tommy ordered up another waitress. That was a brutal table. 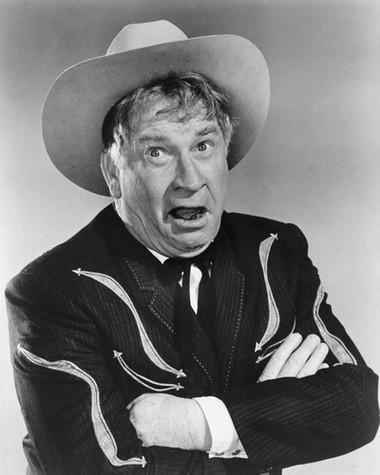 The Palomino Club is in North Hollywood on a very busy street named Lankershim Blvd. That’s also where the front door of the Palomino is located. Tommy had a guy named “Tiny,” who checked ID’s and let people in the door. He was also the bouncer and he’d sometimes throw people out. If Tommy needed Tiny he’d just yell out his name and Tiny would come into the club from outside.

Tiny the Bouncer (poor quality pic) was an intimidating presence 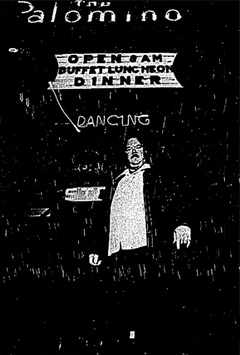 Like a couple other “Tinys” I’ve met, Tiny was the opposite of his name. He was huge and weighed close to four-hundred pounds. Tommy, the owner, saw a big cowboy at the bar giving the bartender some trouble. He yelled, “Tiny!” Tiny came in the bar and Tommy pointed at the offending cowboy. Tiny walked up behind the loudmouth and put his huge hands around the guy, lifting him out of his bar stool. He carried this very mad cowboy to the door and threw him out the front door of the club. The cowboy landed on the cement sidewalk in a heap. Of course, he was really pissed off at Tiny who said, “Don’t come back…you’re not welcome here.” The cowboy said, “Oh, I’ll be back, I’m going to get you…you motherfucker.”

It was very quiet for about twenty seconds and then, well, the bar resumed being a bar. Chill Wills had forgotten our run-in about Louise and he was actually pretty funny. He had worked with all the cowboys on TV and in the movies. He liked John Wayne a lot but everybody else was a “pussy” according to him. I asked, “What about Roy Rogers?”…” A pussy,” he replied. “How about Gene Autry?” “A big pussy”, he said.

Well, about this time, we had an interruption. Tiny was standing in the doorway with a very weird, worried look on his face and Tommy said to him in a very irritated tone, “Tiny, what the hell are you doing in here? You’re supposed to be outside.” So we’re all looking at Tiny, who had a startled look on his face, as he walks our way. Slowly, he turns around and points to his giant rear end – and there’s a big, white hunting arrow sticking out of his ass!!!!!

Evidently, the guy who got thrown out at the beginning of our dinner went home, and, got his friend to drive him back to the Palomino Club. When Tiny was looking into the door of the club the outraged yahoo had shot Tiny in the ass with an arrow!

They called the ambulance and Tiny was so big it took four medics to carry him out the door. And, that’s the last I saw of Tiny…being carried out on a gurney, laying on his stomach with a long arrow sticking straight up into the air with beautiful Indian feathers just blowing in the breeze.

If I hadn’t been there, at the center of this craziness, I would never believe that it all happened in one day. Driving around Hollywood with Bill Nudie in his crazy “cowboy Cadillac”, delivering custom clothing to the stars, was one thing. And I’d had dinner with Tommy Thomas plenty of times, but never with someone famous like the cowboy movie star (and curmudgeon), Chill Wills. Of course, the crowning touch was being present when Tiny, the bouncer, got shot in the ass with an Indian arrow! I’ll never forget Tiny being carried out (face down) by four, strong medics, with an arrow sticking out of his ass – it seems like the kind of comical picture that only Hollywood could create. It was like I’d been dropped into some wacky, Mel Brooks western!

So, “happy trails” for now, pardners – thanks for tagging along. Coming up: In the next installment, we’ll meet Frank Zappa and Stevie Wonder.

“I Don’t Mind” – the B Side of Our First Single

This was really the first song I ever wrote and the “B” side of our single, “Hot Little Hands”.

8 thoughts on “5. The bizarre Revenge at the world famous Palomino Club”