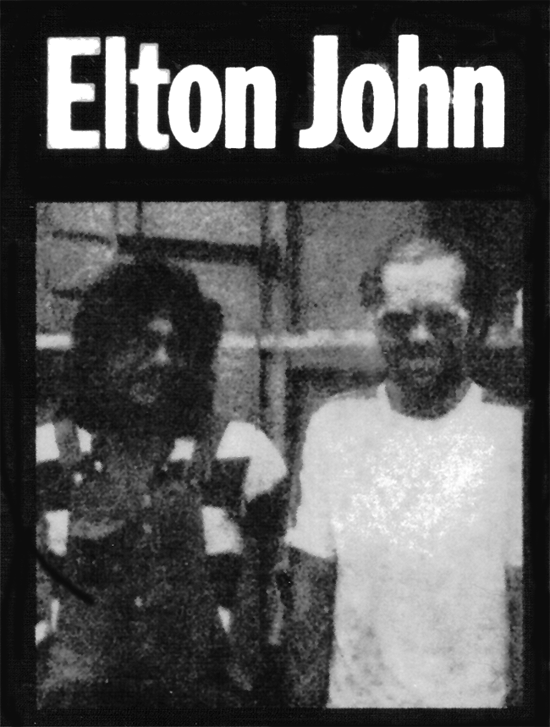 In the 70’s, before I moved to Australia, I was working at the Guitar Center in Hollywood. I think I’ve have mentioned, before, that I was the head of the keyboard/synthesizer Department. As a result of working there I got to know a lot of professional keyboard players and, also, got to know a lot of fantastic groups through their keyboard players.

For instance, Elton John was getting ready for a big USA tour and I was working with his keyboard player, James Newton Howard. Elton strictly played the piano and James played all the other keyboards. James had six different keyboards on stage, and, was a musical genius. What a great player and what a wonderful musical mind! He went on to write film scores for a lot of very big movies including “The Dark Knight”, “The Hunger Game”, “The Fugitive”, “Fantastic Beasts” and many more.

The day I met Elton John his whole band was in town to practice the show for their upcoming US tour, which was about to start. I had seen him at the Troubador in LA when he first came to town, and, he was such a big success.

In Hollywood and the other entertainment capitols here in the states – like Nashville, New York and San Francisco – there are places called “S.I.R.” (Studio Instrument Rentals) which offer huge buildings where groups can rent sound equipment, set up their whole stage light show, and play through their entire program in a place that’s very similar to the stages on their tour.

I was always going there for one thing or another. That’s where I met Elton John. I actually met him in the bathroom. It was a bit personal, I guess – I met him while we were both in the bathroom, standing next to each other, peeing. I didn’t exactly want to look down and say, “Hey, You’re Elton John.” Instead, I said, “I love your new song.” It was the duet he sang with Kiki Dee called, “Don’t Go Breaking My Heart.”

“I was in the studio when you guys recorded it,” I said. He said, “I thought you looked familiar,” he said and I replied, “I was helping James Newton Howard.” “Do you need a ticket for the show this week-end?”, he asked. I said, “Sure, I’d love to see your show.” And, he gave me a couple backstage passes. As he was walking away he said, “The next time I see you, I’ll buy you a beer before I piss it away.”

By the way: Out of all the shows I have seen in LA, I think Elton John’s is my favorite. The whole band was unbelievably good and Elton was the best. Sorry about the bad picture of Elton John and me. I lost the original and only had this newspaper copy.
I left Elton John’s giant room and went to another smaller stage where they had a beautiful Steinway grand piano which I always enjoyed playing whenever I visited S.I.R. I sat at the piano and played and there was no one in the room, and, the piano sounded beautiful. I noticed a guy with very long, messy blond hair come limping across the stage towards me until he stood near the piano, listening.

He said, “Hey, you play the piano real good.”

He started to sing very, very slowly and with a stutter.

I said, “Hey, that sounds like an old Jan and Dean song I loved when I was in junior high school.”

“Really”, I said. I was really excited, and, kind of astounded.

“How are you feeling?” 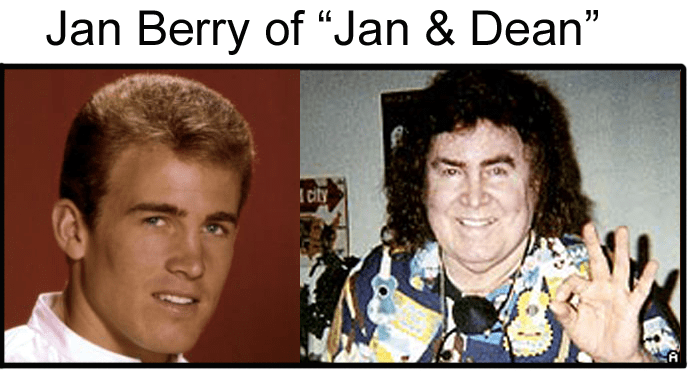 Several years earlier Jan had been in a tragic car accident that had thrown him into a severe coma. When he finally awoke he suffered from a terrible case of of brain “aphasia”. This kind of injury doesn’t really effect intellect, but, causes loss of memory and can result in other impairments. In Jan’s case, it really impacted his speech and his ability to use and understand words. Of course, as a singer and performer the accident effectively ended his career.

Jan still lived in the house he purchased when his career was going great. It was a big house near the beach. He used to sleep on the beach when he got lost. A lot of people took advantage of him and a lot of hippies moved in to Jan’s house. I read that part of the Manson family was staying at Jan’s house when they were hanging out with Dennis Wilson of the Beachboys. The story I got was that Dennis had a hard time getting them out of his house.

When I met Jan he was trying to get his songs together but his memory and his slow rhythm made it impossible to sing through a whole song. I played several of their songs, trying to help him sing through them and remember the lyrics. Jan told me that he and Dean tried doing a concert at the beach where they secretly lip-synced their songs, but, in the middle of their third song the tape recorder got unplugged. They got it plugged right back in, but, the damage was already done. The audience knew what had happened and the crowd went nuts and got a little hostile. They started yelling, “Cheater, cheater.” Jan said it was very embarrassing.

There was another guy who showed up at S.I.R. looking for Jan. It turned out it was Jan’s manager and he was really a suspicious character. I saw him slip Jan a joint and it turned out to be very strong marijuana laced with Angel Dust – which is an elephant tranquilizer. For someone like Jan, with his memory deficit, it was a terrible thing to give him. I told the guy to get the hell out of there.

I saw Jan a couple more times at his house and tried to help him remember the words to his songs. But, it never worked and we lost touch.

I never saw Jan again but I heard that he tried going on the road with a guy he called Dean. But, it wasn’t the real Dean and the tour was a flop. Jan could never sing in time, which I saw with my own eyes. I was sad to hear that Jan passed away in 2004. He was a gentle and talented man.

4 thoughts on “10. Standing next to Elton and Dead Man’s Curve”